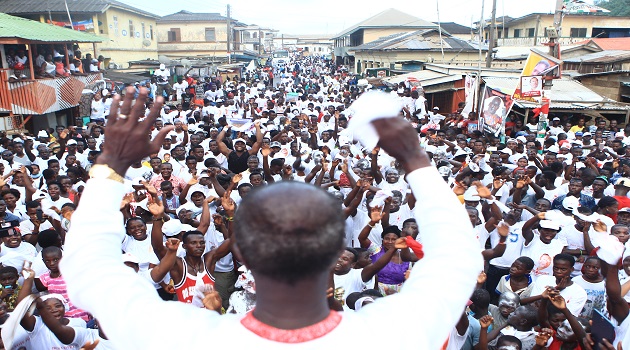 Presidential Candidate of the Progressive People’s Party (PPP), Dr. Papa Kwesi Nduom, has told thousands of party supporters at mammoth rally held in Elmina in the Central region that some politicians went to great lengths to get him out of the 2016 presidential race because they saw him as a threat.

The rally was well attended by supporters and residents including traditional rulers in the Komenda Edina Eguafo Abirem (KEEA) district led by the Paramount Chief of the Edina Traditional area, Nana Kojo Conduah VI, who were cladded in white apparels.

A massive float that preceded the rally brought the entire Elmina township to a total halt.

He told the teaming crowd that because the PPP is now all over the country, some parties and their leaders fear they will lose their ‘world banks’ to him. 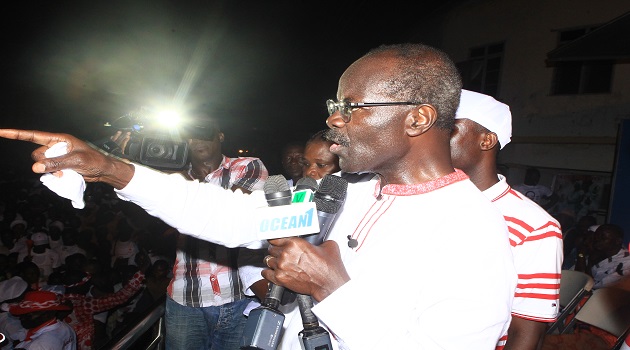 “They said we didn’t have people supporting the PPP across the country so why do they fear?” he wondered.

Dr. Nduom added that the said politicians and their parties desperately wanted him out of the race because they know he will do better in government and that all corrupt government officials feared prosecution for embezzlements and negligence.

…Those who have stolen Ghana’s money know that I will use all legal means to take back those moneys so they are scared and want me out.”

He sang the popular Catholic hymn ‘Yesu Ka Ye Ho’ and thanked the people Komenda, Edna, Eguafo and Abirem (KEEA) for their prayers and support and particularly for travelling to Accra to support him.

The business gem told the crowd that he did not want their votes because he was a native but urged them to consider his works in the area and vote massively for him on December 7.

He disclosed that a fishing cold store is about to be constructed at Komenda, libraries are to be sited at Agona and Abrishea respectively and that he will also be commissioning a business project in Sanka all in the KEEA district.

Dr. Nduom added he will build a new palace for the people of Edina [Elmina] with an ultramodern town hall by close of year.

Prior to the endorsement, Nana could not hide his closeness to God and in a prayerful mood turned the rally into a worship session. He thanked his people for travelling to Accra to support Dr. Nduom.

“Your victory is for Ghanaians; I urge you to consult God in all your decisions.”

The chief used the occasion to preach against political violence and urged the party supporters to ignore provocations from other party members.

Prior to arriving at Elmina, Dr. Nduom made stops at Kasoa, Budumbura and Makessim markets and a drive-through Cape Coast.

His drive-through at Winneba coincided with a health walk organised by the party’s Member of Parliament aspirant for the Effutu Constituency, Nana Ofori Owusu.

Dr. Nduom joined the over one thousand participants to walk through key streets in the town.

He received rousing cheers and applauds from the traders some of who left their wares to wave their cloths at the PPP leader with some pumping white powder into the atmosphere.

He thanked them for their support and prayers and urged them to vote for him for good schools for their wards and excellent access to health services.