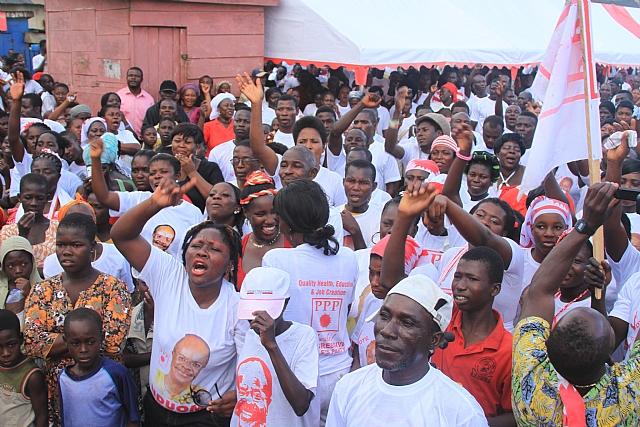 The town of Elmina – the home of the flag bearer of the Progressive People’s Party – Dr Papa Kwesi Nduom in the Central Region, went into a frenzy on Friday October 28 after an Accra High court presided over by Justice Kyei Baffour, ORDERED the Electoral Commission (EC) to allow Dr Nduom makes amends to his nomination forms as far as the December 7 polls are concerned.

The court said the EC breached the law of natural justice in disqualifying Dr Nduom from the race, and, therefore, has asked the election management body to allow him to make the necessary corrections on his nomination forms.

After the court ruling, scores of residents and supporters in the area took to the streets amidst chanting of victory songs and hoisting of PPP flags and paraphernalia in joyous mood.

Most of the residents were heard chanting “Adwuma Wura, Adwuma Wura” to wit, ‘provider of jobs’ – Dr Nduom’s moniker. They were optimistic that Dr Nduom will win the elections to become the next president of Ghana.

ClassFMonline.com has gathered that the supporters are planning a “big” celebration in the evening of Friday.