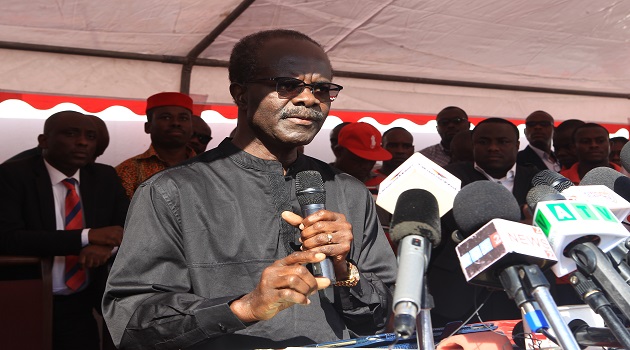 Flag-bearer of the Progressive People’s Party (PPP), Dr. Papa Kwesi Nduom, says his rights are being trampled upon by the Electoral Commission (EC).

Dr. Nduom’s assertion follows his disqualification by the EC from the December 7 presidential election.

According to him, the EC failed to do its work well when it deliberately disqualified him.

“That is why we are in court and I hope that in the end, the law will prove that I must be on the ballot paper and that my name, picture and symbol of the PPP will be on the ballot sheet,” he said.

Dr. Nduom was speaking to a cross-section of journalists in an interview during a rally organised by PPP parliamentary candidate for Cape Coast South constituency, Mr. Bright Edem Drofenu, in the Central Region over the weekend.

He revealed that a petition to that effect “is on-going in all the constituencies for everyone to know that there is a battle on democracy, and the rule of law must prevail.”

He discounted the rumour that the PPP has been disqualified from this year’s elections, adding that “whatever be the case, I’ll not stop campaigning for the party and its parliamentary aspirants.”

“We are still in the race so let no one deceive you and everybody should understand that whether I am on the ballot or not, I am still the flag-bearer of the PPP and will always be there for the party for the rest of the campaign season,” he stressed.

In this regard, he charged the people not to kowtow to the deception and propaganda of the ruling National Democratic Congress (NDC) and the New Patriotic Party (NPP) indicating that the two parties have nothing good to offer the country.

“Of what good has voting for the NDC and NPP since 1993 been for the nation? No matter how they try to restructure their messages every election year, they cannot take the country to the pedestal it deserves even if they are given so many years,” he pointed out.

Dr. Nduom stated that the PPP has already demonstrated to Ghanaians that in its private capacity, it has been able to create jobs for millions of Ghanaians.

“We are investing in a rice mill that will begin producing rice by next week in the Volta Region and also investing in a greenfield rice mill project in the Central Region that will demonstrate that indeed Ghana can produce good rice to reduce the importation of the over $1 billion of rice into this country,” he disclosed.

“We have also invested in a cocoa processing factory that now produces cocoa powder and these are all to show that given the chance, we can do a lot with the money Ghana has,” he assured

The parliamentary candidate on his part bemoaned how the nation’s finances was being mismanaged, adding that a PPP government will ensure the prudent utilisation of national funds to alleviate the suffering of the masses.

He lamented the falling standard of education in the constituency and promised that a PPP administration when given the nod will build a library in the area to boast education.

He also said a PPP government will ensure an efficient and timely supply of fishing equipment to boost activities of fishermen.

He therefore charged the people to assess their standard of living and vote massively for the PPP in the December 7 polls.