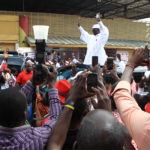 The flagbearer of the Progressive People’s Party (PPP) Dr. Papa Kwesi Nduom has taken a dig at President John Mahama’s Accounting to the People tour saying he doesn’t need to travel across Ghana with taxpayers’ money to be seen as working.

Dr. Nduom said he has been working all over Ghana since 2012 and does not need embark on any kind of tour to be seen.

Speaking in an interview on the Citi Breakfast Show, the PPP’s flagbearer stated that, “I won’t use the taxpayers’ money in the name of Accounting to the People.”

The President’s Accounting to the People tour has been described by some including the opposition New Patriotic Party (NPP) as abuse of incumbency.

Without mentioning names, Dr. Paa Kwesi Ndoum criticized the President John Dramani Mahama’s tour which has taken him all over Ghana saying,“I can’t go out and use the tax payer money to claim that I am accounting to the people to campaign as somebody has been doing. I don’t have to go around the country to rediscover Ghana like somebody has been doing. Since 2012 I have been going to all the district creating jobs so I have been around and I know where everything is in Ghana and what the situation is.”

Dr. Nduom who was on Saturday affirmed as the party’s presidential candidate told the host of the Citi Breakfast Show, Bernard Avle that, the November polls will be his final attempt at the presidency.

“This is the last opportunity for Ghanaians to recognize the person who can do the job. If this one passes by, I have done what I can. The rest is up to Ghanaians.”

Dr. Nduom also revealed that his party is well aware of his plans and he explained that the mindset behind his decision was to give youth in his party an opportunity to lead.

“I have told our party that this is the election that I want to preside over and from then on leave leadership positions to our younger people so this is my last round.”