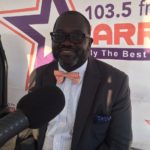 The Parliamentary Aspirant of the Progressive People’s Party for the Effutu Constituency in the Central region Nana Ofori Owusu says all Political Parties contesting the 2016 General elections are starting on the same footings with non having advantage over the other.

Nana Ofori was reacting to election pollster Ben Ephson’s analysis on the chances of the various parties in the coming election which sort to create the impression that the PPP had no chance.

The tough talking politician said, the elections of 2016 is not about who had what in which election year, but rather about which of the parties can offer Ghanaians better living conditions and jobs.
Nana ofori stressed that, if history and analysis was to be considrred, then the cases of Benin must be cited when an independent candidate with no chance won against other notable political parties.

He said, “Ben Ephson must tell this to the marines, they will better understand his analysis”

He said Ghanaians in the past had doubted the ability of Dr. Ndoum when he said he was going to beat the GhananCommercial bank by extending the GN BANK to every district of the Country. He said “The GN Bank now has 250 branches and counting, something that Ghana Commercial Bank could not achieve since Independence”.

He said Ghanaians can now attest to the facts on the grounds that both the NPP and the NDC do not have what it takes to change.

The living standards of the average person and cited the Effutu Constituency as an example, he said, “when you come to the Effutu Constituency you have executives of both the NPP and the NDC working for the PPP, in 2012 they never did that, which tells you the dynamics have changed, therefore one cannot analyse the 2016 election using 2012 statistics”.

Nana Ofori said he wondered why the pollster could not analyse the election based on current happenings in the country, but rather based his Statistics on past election results, he stressed that, the message of Dr. Ndoum has really gone down to the Ghanaian people who will take a decision come November.

Nana Ofori noted that, it is surprising Ben Ephson could not analyse the election the current situation in the country which has seen many Ghanaians.