2016 flag-bearer of the Progressive People’s Party (PPP), Dr. Papa Kwesi Nduom, has urged Ghanaians not to waste their votes on people who make loads of promises but do very little.

“This year’s campaign is about promisers and doers. Some people know how to talk, others know how to do it. I’m not a promiser but a doer, there is no challenger when it comes to job creation, and I don’t have co-equals,” Dr. Nduom asserted.

Dr. Nduom was speaking at the party’s third Annual Convention which came off on Saturday, July 16, 2016 at the Ghana International Trade Fair Centre, La in the Greater Accra Region.The PPP standard bearer therefore, seized the opportunity to call on the Ghanaian electorate to support and vote for the PPP for change.

“The question is, are you better off today than you were in 2009 or 2012? If you are not satisfied, if you are fed up with mediocrity, if you are tired of promises and promises, I have one answer for you. Support and Vote for change. Vote for The PPP and Papa Kwesi Nduom,” Dr. Nduom said to a thunderous applause from the PPP faithful(s).

The party also used the convention to overwhelmingly endorse Dr. Nduom as its presidential candidate for this year’s General Elections.

While admitting that both the governing National Democratic Congress (NDC) and the New Patriotic Party (NPP) have done their best, he averred that “their best has not been good enough.”

He further asked Ghanaians to compare him with the two leading presidential candidates, President John Dramani Mahama of the NDC and Nana Addo Dankwa Akufo-Addo of the NPP and judge “who amongst us is cut for the job of the presidency.”

According to him, since the upcoming elections would be on job creation, it would be a misplaced priority if Ghanaians retain the NDC or bring back the NPP. 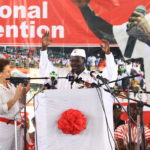 Describing President Dramani Mahama as a “promiser,” Dr. Nduom said he will not promise millions of jobs “because I have already given jobs to Ghanaians, and the evidence is there for everybody to see.”

Dr. Nduom however, noted that every individual on this earth has a talent given to him or her by God which cannot be taken away.But he said the situation confronting Ghana today required somebody who has the talent of creating jobs for the teeming unemployed youth and at the same time good at managing the economy.Though he said both President Mahama and Nana Addo have their individual talents, Dr. Nduom said when it comes to managing the economy and creating jobs, none of them comes close to him.

For instance, he said, when it comes to law Nana Addo is a gem, while President Mahama is also good at communication.But he stressed that none of them can beat him to job creation which he said was what Ghanaians needed at the moment. The PPP, Dr. Nduom stressed, will run an all-inclusive government, using the best and competent people in the country when given the nod.

He also assured Ghanaians that a PPP government will not have a place for the winner-takes-all syndrome which has eaten into the body politics of this country. The astute politician reiterated his party’s commitment to ensuring that all children get quality education with “our free compulsory continuous education from KG to Senior High School.”

And not only that, Dr. Nduom also pointed out that a PPP government led by him will ensure the election of Metropolitan, Municipal and District Chief Executives (MMDCEs) as well as the separation of the Attorney General’s Department from the Ministry of Justice.

He further assured Ghanaians that “there is hope coming so you should go and spread the message of the PPP to your friends, wives, husbands, relatives and everybody.”

Earlier, National Chairman of the PPP, Nii-Allotey Brew-Hammond, who led the party to adopt its “Political Platform” for the 2016 electioneering campaign, called on Ghanaians to reject both the NDC and the NPP in this year’s presidential and parliamentary polls.

He said a PPP government will bring about total transformation, where every Ghanaian will be free from preventable diseases, have regular supply of power, potable water, jobs, free compulsory education and adequate security.

For his part, National Secretary of the party, Murtala Mohammed, urged Ghanaians to vote out the NDC government and bring the PPP “so as to enjoy the change that they yearn for.”

He also stressed the need for change, noting that a government of the PPP will make Ghana a better place to live.

The PPP also used the occasion to introduce over one hundred of its parliamentary candidates.