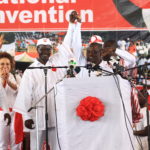 The Progressive People’s Party (PPP) today endorsed Dr Papa Kwesi Nduom as its flag bearer for the 2016 presidential election at its third national convention at the Trade Fair Centre in Accra.The convention brought together several delegates across the country.Accepting the endorsement Dr Nduom urged Ghanaians to vote out the Mahama led administration for plunging the country into unending hardship and poverty.

He said, the ailing economy of the country no more lies with the National Democratic Congress nor the New Patriotic Party who have applied their “property owning” and “social democrat” ideologies with little or nothing to show for.According to Dr Ndoum the PPP was the best alternative to lead the country to the promised land.He said the PPP was already leading by example by creating jobs across the length and breath of the country.

“I will not promise to build one factory in every district, I am building them. I have created jobs across the length and breadth of the country and I will continue to create more when you vote for the PPP in the 2016 polls”, he added.