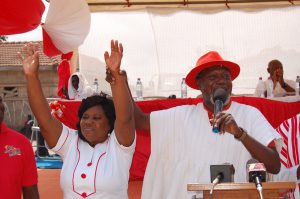 The Progressive People’s Party on Saturday 9th July, 2016 sent a strong signal to the other political parties that it is capable and very prepared to take the Cape North Parliamentary Seat. The party launched its campaign for the constituency and also outdoored the parliamentary candidate in the person of Mrs Sarah Mary Ewuresi Bucknor who was their candidate in the 2012 General Elections.

The event which brought together party supporters and sympathizers also had the National Chairman and Secretary in attendance. Other officials include regional, constituency and polling executives. The event started with a float from the Ankaful Junction through the principal streets of Abura all the way to Pedu Junction and then back to the Abura Roman School Park where the durbar took place. Officials took turns to deliver various speeches. The Cape Coast North Constituency Chairman, Mr. Agyekum Sunday Atara Abraham in his speech showed appreciation for the overwhelming support the party had received in recent times. He urged party faithfuls to relentlessly continue to show their love for the party and not to be swayed by the cunning gimmicks of the NDC and NPP.

The National Secretary, Murtala Mohammed in his address also challenged participants to help diffuse the propaganda that a vote for the PPP is a “wasted” vote. He rather postulated that a “wasted” vote is that which brings no development to us as a people but hardship, increased unemployment and economic mismanagement. He continued to encourage them that the overwhelming number of people gathered was a clear manifestation of the support of the PPP contrary to what people say that we have few supporters.

Dr. Nii Allotey Brew-Hammond, the National Chairman of the party also called on all and sundry to help kick the NDC out of power and give the mantle to the Progressive People’s Party. He said that for so many times we have been voting and keeping getting the same trend of leadership so don’t we change the baton this time around. He asked participants whether they had water running through their taps at all times. He also asked why successive governments have turned a blind eye to the pathetic situation up the north where both human and animals drink from the same source of water. He therefore officially out-doored the Parliamentary Candidate and declared the Cape Coast North Campaign duly launched. 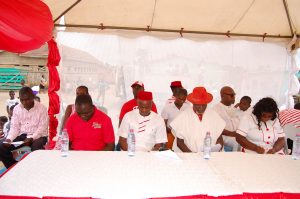 The Parliamentary Candidate, Mrs. Sarah Mary Ewuresi Bucknor in her speech also showed her heartfelt appreciation for the massive support the people have given her. She assured them she would not disappoint them when she is given the nod. She seized the opportunity to recount some of the major things she had done in the constituency. She mentioned that even though she lost the 2012 elections, with the support of Dr. Papa Kwesi Nduom supported her to fulfil some of her promises. The party, even in opposition has constructed communities centres for some of the communities within the constituency. The party has also provided women and some men with capital support in their businesses. Skills training in several vocations have also been provided for the youth from 2012 to date. Employment opportunity have also been given to many more youth within the constituency in some Groupe Nduom Companies through her efforts.
In her conclusion she seized the opportunity to thank all who have supported her in various ways in her endeavor. She was extremely grateful for the support of Dr. Papa Kwesi Nduom and his wife Mrs. Yvonne Nduom for their support and encouragement. 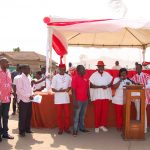