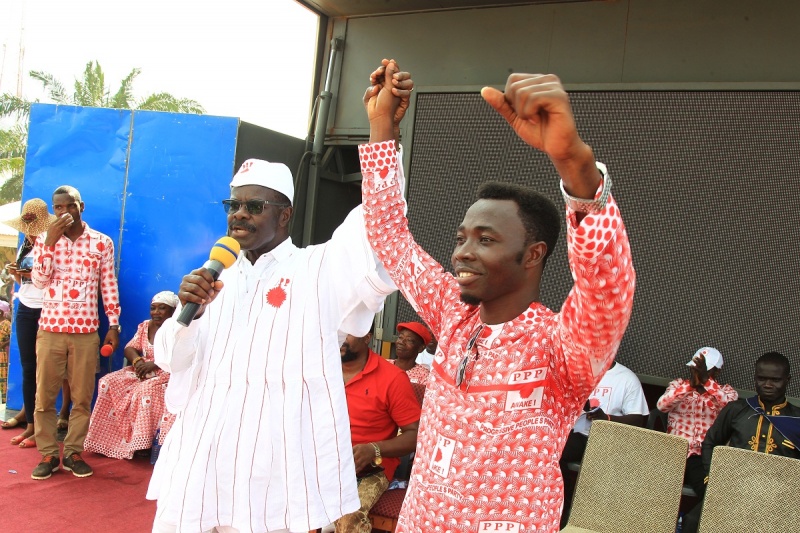 The flag bearer of the Progressive People’s Party Dr Papa Kwesi Nduom has urged the people of Ofoasi-Ayirebi not to allow a ‘stranger’ they do not know to lead them, but rather vote for a home boy they can trust.Addressing party supporters at Abenase, Dr Nduom urged the people to support John Obiri Yeboah to go to parliament, since he has been with them through their “trying times and the good times” and knows the challenges of the area.“This is Akyemansa, your area has lots of problems, from water to roads, schools. So what this means is that you need someone who knows the constituency and has lived here and experienced your difficulties to lead the area out of the predicament it finds itself.“Obiri Yeboah you know, you have lived with him and has done lots of things together with you but can you say same of the other guy, has he ever spoken of this area when he had the opportunity to do so? This means you can’t put your trust in him,” Dr. Nduom said.Yeboah asked the electorate to reward him with votes on December 7, based on what he has done for them over the years.“I am a local boy that has laboured with you, I have fetched firewood with you in the past and so if you need someone to lead Akyemansa it definitely must be someone you know. You have seen the many wonderful things I have provided even in my private life. So I am urging you to reward me with your votes and send me to parliament to be able to lobby for good things for you,” Yeboah stated.He is contesting the parliamentary seat with two other candidates – Kojo Oppong Nkrumah of the New Patriotic Party and John Budu of the National Democratic Congress.Source: Ghana/starrfmonline.com/