Presidential hopeful of the Progressive People’s Party (PPP), Dr. Papa Kwesi Nduom, has appealed to eligible Ghanaian electorate to give him four (4) years to govern the country for better economic conditions.

Dr. Nduom, who is touring Central and Western Regions as part of his ‘Thank You’ tour, explained that the kind of socio-economic development he will bring when voted into power will be amazing.

At a rally in Evalue-Gwira in Axim in the Western Region on Sunday, October 30, 2016 the PPP flag-bearer told the people to examine their lives first before they make a decision on who to vote for in the December 7 polls.

“If there has been any meaningful change in your life within these four years of President Mahama, then you can vote for him but if not I advise you to make the right choice by voting for the PPP,” he said.

He further advised them not to be deceived by gifts being given to them by some political parties just to win their votes.

“Vote against politicians who bring you outboard motors, pans, and premix fuel. These things won’t take you anywhere if the sea is unprotected and there is nothing to fish for. I will do away with foreign fishing companies who are using illegal methods to fish in our waters,” he averred.

Instead, the PPP flag-bearer urged them to consider their future and that of their children so as to get a better foundation for them.

He respectively chided the New Patriotic Party (NPP) and the National Democratic Congress (NDC) over their promises of ‘one-district-one factory and three million jobs. 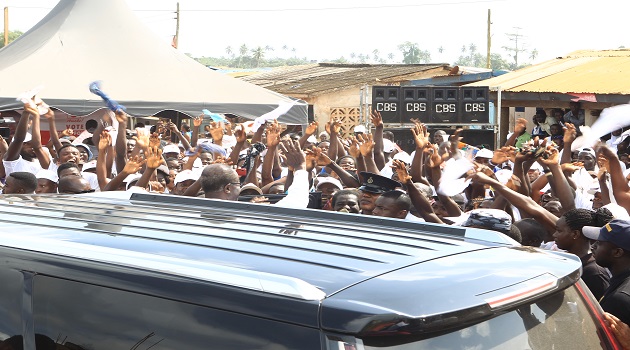 Describing those promises as a façade,’ Dr. Nduom said they are election promises which cannot be fulfilled.

However, he claimed that his numerous businesses in the Komenda-Edina-Eguafo-Abirem (KEEA) District make him the better choice when it comes to job creation in this year’s election.

In his opinion, the people of Western Region must be the first to enjoy from the oil proceeds before any other region.

Also at Anyinase in the Ellembelle constituency, Dr. Nduom told party supporters and residents of the area that, “other political parties fear PPP because of my business acumen.”

He wondered why the constituency cannot be like Johannesburg, a city in South Africa that has benefitted from proceeds of mining activities being done there.

Dr. Nduom further wondered why the head office of the Ghana National Petroleum Corporation was not sited in the Western Region.

“GNPC’s head office will be brought to the Western Region,” he promised.