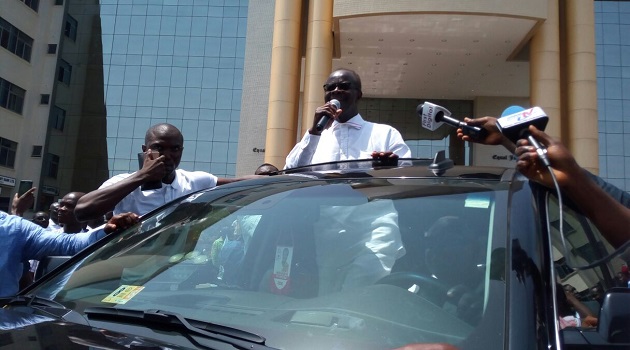 An Accra High Court on Friday, October 28, 2016 rendered the Electoral Commission (EC) impotent in a landmark case involving the Commission and the flag-bearer of the Progressive People’s Party (PPP), Dr. Papa Kwesi Nduom, over the latter’s disqualification from standing as his party’s presidential candidate in the upcoming December 7 election.

In his twenty-one page ruling which lasted for an hour, the Presiding Judge, Justice Eric Kyei Baffour Esq, quashed the decision of the Respondent (EC) and subsequently ordered the EC to afford Dr. Nduom the opportunity to make the necessary alteration or amendment to his nomination forms.

Standing on the point of natural justice, it was the view of the court that the disqualification of the applicant from standing as the presidential candidate for his party without any opportunity for correction was like “taking from the applicant what the rules have accorded him.”

According to the court, “to reduce the denial of fair hearing that the law affords the applicant before a decision is made to disqualify him and then agree to a meeting that took place after the disqualification is to trivialise the weightier and substantial mandate placed on the shoulders of the Returning Officer (EC).”

The Court asked, “What was the usefulness of the meeting if it would not result in the applicant having the opportunity to effect the amendment or ensuring the compliance of the first respondent with the law?”  The judge unequivocally stated that fair opportunity to amend the forms must precede any action to disqualify and not the other way round.

Throughout the extensive and detailed one hour reading of the judgement which was interspersed with quotations and references from several cases locally, in the United Kingdom and India, Dr. Nduom sat in court very well composed with his eyes fixed in the direction of the judge.  It was as if he had signed off his fate to God.

Then at exactly ten minutes after 11 O’clock in the morning, the judge pronounced judgement in favour of the applicant.  Suddenly, with some alacrity and an illuminating gesture, Dr. Nduom quickly hugged his wife, Yvonne, who was sitting right next to him in court.

He then turned with a big smile to shake the hands of his running mate, Brigitte Dzogbenuku, who was sitting to his left and then to his two sons sitting directly behind him and then to everyone else who came to support him.

There was a simultaneous rapture of joy on the faces of everyone, his team of Lawyers, family members, Party big wigs, friends and loyalists who were in the courtroom.

Victory smiles were visibly on the faces of all with some dusting white powder on their faces and bodies to signify victory.

Explaining the ruling, Justice Kyei  Baffuor pointed out that Dr. Nduom’s  application was in the nature of judicial review which reliefs sought certiorari to bring to the court the decision of the Respondents (EC) dated the 10th of October, 2016 which disqualified the Applicant as a presidential candidate for the 2016 general elections for the purpose of having same quashed.

The judge continued that, the reliefs of the PPP flag-bearer also prayed the court for an order of prohibition to be directed at the Respondent from proceeding with balloting for positions in the presidential elections.

And finally he said the reliefs further prayed the court to order the 1st Respondents (Mrs. Charlotte Osei) in her capacity as Returning Officer for Presidential election to grant Dr. Nduom the opportunity to amend and alter the one anomaly found in his nomination papers as well as accept his nomination papers as amended or altered to enable him contest as a presidential candidate for the December 7 polls.

In summary, the eminent Judge said, the grounds upon which Dr. Nduom mounted his application were anchored on first, breach of the rules of natural justice (audi alteram partem) and second, error apparent on the face of the record.

“And as there is the need for admission of further evidence and arguments to determine error, if any, I find and I am persuaded that the second leg of Applicant’s (Dr. Nduom’s) challenge to the decision of the Respondents (EC) that there was an error apparent on the face of the record has not been made out”, he said.

However, when it came to the second relief, which was the rule of natural justice, the Judge was of the view that Dr. Nduom was not given fair hearing before his disqualification as a presidential candidate of the PPP.

“I find that submission, again with profound respect to Sory, Esq (Counsel for EC) to be gravely pedestrian and peripheral”, he added.

Welcoming the decision of the court, the elated PPP leader who was dressed in a splendid white apparel said, “It‘s not a great moment for me, it is rather a great moment for our country’s democracy for our human rights.  It is a victory for Ghana.”

Dr. Nduom was one of 13 presidential aspirants who were disqualified from contesting in the 7 December, 2016 election with the EC alleging illegalities on their nomination forms.

Following his disqualification, the PPP filed a writ seeking an order from the courts to prohibit the EC from placing only four presidential candidates on the ballot paper.