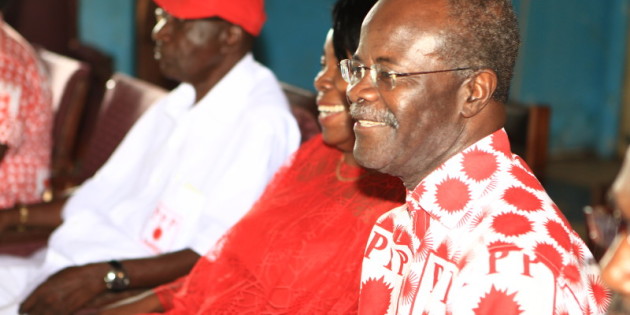 Presidential hopeful of the Progressive People’s Party (PPP), Dr. Papa Kwesi Nduom, has assured farmers in the country of better living conditions when given the nod to govern this country.

Dr. Nduom, who is currently in the Brong-Ahafo Region as part of his campaign tour ahead of the December 7 polls, told a teeming crowd at the party’s rally held in the Sunyani East constituency that farmers in the country must not lack anything.

According to him, having travelled extensively across the globe, “farmers are among the most well to do people in society.”

In this regard, Dr. Nduom reassured farmers that a PPP government led by him will put in place policies that will enrich their lives.

He, therefore, called on the electorate to vote massively for the PPP.

“If you want development then don’t waste your vote on either John Mahama or Nana Akufo-Addo but vote for “Edwumawrua” (to wit Job Provider) and that is Papa Kwesi Nduom,” he said.

He also expressed worry about the influx of illegal migrants who were involved in illegal mining known otherwise as galamsey.

He could also not understand why government would allow foreign nationals to take over “our farm lands for illegal mining activities.”

However, Dr. Nduom said his administration will flush out all foreign nationals engaging in illegal mining, and restore arable lands and water bodies in the area to the farmers, so as to give back jobs to the local people.

“Foreigners from Vietnam and Italy have taken over all the farmlands and enriching their countries, leaving Ghanaian farmers unemployed and penniless. I will sack all these foreigners from Ghana so that our farmers can cultivate more crops to improve their lives and that of their families,” he stressed.

The PPP flag-bearer also jabbed President Dramani Mahama over his poor management of the economy.

“If John Mahama cannot manage the country he should hand it over to me. I can transform Ghana from poverty to a well-developed country,” Dr. Nduom said.

He used the occasion to introduce the party’s parliamentary aspirant for Sunyani East constituency, Madam Vivian Tetteh, to the constituents.

For her part, Madam Vivian Tetteh promised to ensure that good roads befitting the area are constructed including other developmental projects when voted to represent Sunyani East in the next Parliament as the Member of Parliament (MP).