Female members of the Progressive People’s Party (PPP) have pledged to embark on a vigorous campaign across the country to ensure that the party wins the 2016 general election to alleviate the continuously worsening socio-economic plight of Ghanaians. They attributed the worsening plight of Ghanaians to mismanagement of the economy by the government and its lack of understanding of the situation in order to institute appropriate policies to solve the country’s problems.

To them, it is only the party’s presidential hopeful, businessman Dr Papa Kwesi Nduom, who possesses the appropriate antidote to Ghana’s current economic situation and, therefore, called on Ghanaians to give him the mandate. 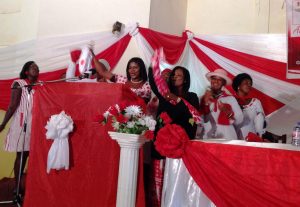 That was the central message by various speakers who addressed the National Women Conference of the party held at the Ghana National Association of Teachers (GNAT) Hall in Sunyani last Saturday.
About 300 women mainly from the Brong Ahafo Region and delegates from all the other nine regions took part in the conference which was held on the theme: “The Strategic Role of Progressive Women in Winning Election 2016.”

Addressing the conference, a National Vice Chairman of the party, Ms Belinda Bulley, said the PPP could ride on the contributions of women to win the 2016 general election.
Change
Ms Bulley said the mismanagement of the economy called for a change of government for the better.
“Let’s keep changing governments so that politicians cannot continue to take us for granted,” she said, pointing out that “until that is done Ghanaians will continue to wallow in poverty while politicians continue to use the country’s resources for their selfish aggrandisements”.
On education, Ms Bulley pointed out that officials of successive governments had not been serious with addressing educational problems of Ghanaian pupils and students while they educated their children in expensive schools abroad.

“Ghanaians want the implementation of free, compulsory universal education at all levels and not only free senior high school as being propagated by some political parties.”
Touching on corruption, Ms Bulley called on Ghanaians to fight for systems that would ensure a corruption-free society, adding that “people can be incorruptible if the right systems are put in place”.

2016 election
She urged Ghanaians not to base their choice of their leaders during the 2016 general election on big rallies, since that could not guarantee them the right person to lead the country.
“Both the NDC and the NPP have been given the chance to prove what they can do but they could not deliver.
Let us give the PPP the chance to implement its policies and provide jobs for the jobless in the country.”
She said it would demand a concerted action to bring about the change that the country so needed to put a stop to bad governance.
Ms Bulley said the PPP would focus on the truth “and with God on our side we will cause the change that Ghanaians need”.

Women’s coordinator
The National Women’s Coordinator of the party, Mrs Vivian Tetteh, who is also the party’s parliamentary candidate for the Sunyani East Constituency, called on the people “to use the 2016 general election to test the PPP’.