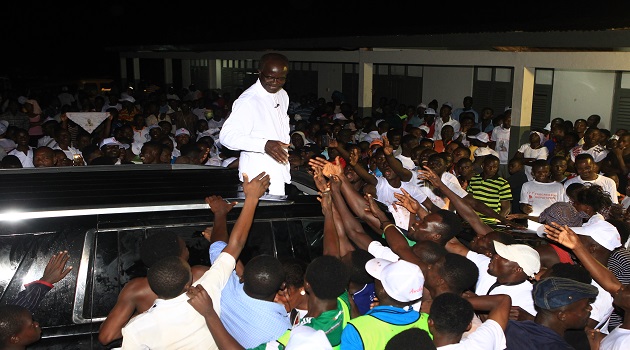 The Progressive People’s Party (PPP) flag bearer, Dr. Papa Kwesi Nduom was at Axim in the Western region to arouse the support base of the party.

Addressing his supporters Dr. Nduom said he is very thankful for their enthusiasm. He only has a short message for the people of Axim and that is to vote wisely. He said, before voting they should put a lot of things into consideration.

Dr. Nduom stressed that the towns growth is stagnant because there is nothing new to talk of. He said the difference between the developed countries and developing countries is that their leaders have great visions backed by strong actions and commitments.

However, the negative consequences for wasting our votes on wrong people can be evidenced by lack of growth in development and hardships in the economy. Political persuasions and unfulfilled promises by our leaders has caused us a lot of harm.

Western region is blessed with so many resources but what benefits are we seeing. A chunk of the country’s wealth comes from here but all that we are getting is poverty because some people are mismanaging the resources to their own benefits.

According to Dr. Nduom, both the NDC and NPP have taken the people of the region for granted for far too long. He added that the region has nothing to show for its oil and gas resources because we are not getting the benefits as been promised by President Mahama.

“The benefits of oil and gas should start from where it’s being produced. This place must be developed first. We must beautify these places before other parts of Ghana enjoy.

Dr. Nduom also spoke about the PPP’s determination to make proper stewardship, job creation, education and health care the cornerstone of its policies for a prosperous Ghana.

Dr. Nduom was emphatic about the new party’s commitment to eradicate malaria and other preventable diseases from Ghana. Through a single purpose drive to clean our environment and ensure good sanitation everywhere in Ghana, Dr. Nduom was confident that malaria can be banished from our country working with a sense of urgency. He said that other countries in Europe and Asia had experienced malaria in the past and had gotten rid of that health menace and Ghana will do it under a PPP Administration.

He also gave the assurance of reviving the fishing industry by protecting the sea.

He advised the fisher folks not be tricked by political leaders by taking fishing nets and outboard motors as incentives to vote them but should rather vote for PPP because they have better plans to protect and revive the fishing industry.

The Parliamentary candidate of Evalue Ajomoro Gwira Constituency Hon. Prince Adjei also asked the electorates to vote for Dr. Nduom, by stating that it’s time for PPP to win the race. He said people should combine their forces and vote for him and Dr. Nduom because credibility shows on their part.

One thought on “DR. NDUOM CAMPAIGNS AT AXIM”