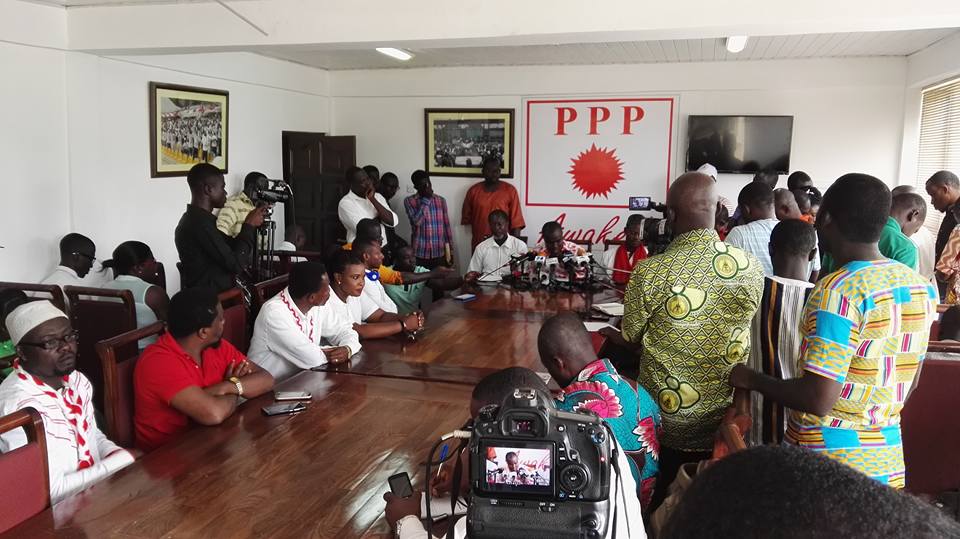 The Progressive People’s Party (PPP) has invited you here this morning to bring to the attention of Ghanaians the blatant discrimination and the selective justice that the EC has brought to the 2016 election process.  This practice has the possibility of plunging the nation into chaos and we must all work to prevent that from happening.

We want to place on record that the PPP believes in the rule of law and shall not do anything which will mar our democratic gains.

As a political party, we have some concerns about the alleged disqualification of our flagbearer, Dr Papa Kwesi Nduom from contesting in the 2016 Presidential elections.

The Electoral Commission at its Press Conference on 10thOctober 2016 accused the PPP of alleged forgery and has subsequently referred the matter to the Attorney-General for possible prosecution.  Our Party has not engaged in any such practice.  We wish to state that the Electoral Commission itself is the major conduit for the committal of all electoral offences including perjury. For example, the statutory declaration form for Presidential candidates requires that the candidates declare under oath that they have declared their assets. In this particular instance, there was evidence before the commission that some of the candidates had not declared their assets and yet they went ahead to swear an oath before a judge, notary public or commissioner of oath that they have done so. Infact, some of them rejected this requirement publicly. While, we all know that lying under oath is a criminal offence under the under the laws of Ghana and the punishment is  a maximum of 10 years imprisonment and this can be found in the Criminal and other Offences Act, 1960 (ACT 30) ; yet the EC went ahead to receive the nomination form with cheers and enthusiasm.

So, the question we are asking is that why did the EC overlook this offence and pass these candidates without raising any issue? Is this not a matter of selective justice? The EC Chairperson is a lawyer and must know this. We understand that Nana Akufo Addo did not comply with this requirement and we sight him for false declaration but he stands qualified per the ECs decision as a presidential candidate. This is clear selective application of the ECs own laws.

You all recall that in April this year the Electoral Commission through its Director of Operations, Mr. Amadu Sulley issued a circular to all political parties on sanctions for non-compliance with the political party’s law, Act 574 with emphasis on the submission of audited accounts. In that letter dated 5th April 2016, Mr. Amadu Sulley made it abundantly clear that “all registered political parties should ensure that the requested information is received by the Commission by the close of work on the 31st May 2016, failing which sanctions will be applied in accordance with the law”.

The Progressive People’s Party complied fully with this directive from the EC while the other Political Parties disregarded it. What is shocking in of this case is that the EC as at today has failed to enforce the sanctions they promised. The double standard of the EC in this matter is mind-boggling. It undermines the EC’s integrity and credibility to be fair and just to all political parties. It makes us wonder if the EC believes that some parties are beyond reproach and are above the law. When did we have rule of parties instead of rule of Law? We do not want to even think that the EC favours or is afraid of some political parties by restraining itself from applying its own rules evenly.

On Friday October 7th 2016, the EC in a press release signed by its Head of Communications Mr. Eric Kofi Dzakpasu, directed all nominated candidates for the 2016 Presidential and Parliamentary elections to submit the banker’s draft in respect of their filing fees to the Electoral Commission by 12:00 noon on Monday October 10, 2016. Since this was an essential requirement for qualification to be accepted as a Candidate for the 2016 elections, as provided for by Regulation 8 (1) (b) of the Public Elections Regulations, 2016 C.I. 94 the PPP complied and made the deposit before 12:00 as directed.  We wish to put on record that the receipt the EC gave the PPP on 10th October 2016 was fraught with mistakes. Could you imagine that the amount the EC quoted in words is different from what is in figures?

Do you know that the receipt EC gave us for the payment of the deposit had Gh1,700.00 in words but in figures they wrote One Million Seven Hunderd (r was placed after e instead of vice versa) Thousand Ghana cedis. Apart from this, on the same receipt, the EC wrote “being payment of parliamentary candidate” (without s) as if payment was made for only one parliamentary candidate. Clearly, we have every reason to believe that the EC has set itself on a course for a possible fraudulent act and we have therefore written to the Auditor-General and the Economic and Organized Crime Office (EOCO) to investigate this matter and prosecute the perpetuators if deemed necessary. Does this not mean that it is possible for everyone to make administrative errors? If this is true, why does the EC want to work together with political parties with iron fists? Why is the EC adamant on its position and is not ready to open up for any discussion? Is this belligerent posture of the EC not dangerous for our multi-party democracy? Does the EC care about Ghana and the possible constitutional ramifications this “go to court” mantra can plunge this nation into? We wish to encourage the EC chair to take a cue from the advice handed down to Dr. Afari Gyan, her predecessor by the Supreme Court in the 2012 election petition case.

It’s intriguing the EC wants to be seen as an institution incapable of mistakes and committing errors; yet they are not immune from administrative errors. We decided to be silent about this issue but we have been pushed to the wall to disclose what happened to our nomination forms. We wish to state that there was no page 46 (Akwapim North district and one other) in the nomination forms we received from the EC. However, we in the PPP did not take them to task. We called the EC to notify them and they proposed an antidote to the error. If the PPP has engaged the electoral commission to correct this blunder, why can’t the EC return the favour? Our current EC commissioners are vindictive to say the least.  This was an unfair treatment and the EC cannot tell us that this was also not a simple mistake.

We call on the silent majority to speak up. We call on the office of the National Chief Imam, the Christian Council of Ghana, the National Peace Council, and Ghana Bar Association to call the Electoral Commission to Order. The commission is out of control and could plunge this nation into chaos and we need to take steps to reverse this trend. Their entrenched and belligerent posture, will only lead this country to a point of no return.

We are confident as a party that the quagmire in which we find ourselves in as a country, suggests that the PPP and Dr. NDUOM be given the opportunity to contribute and provide solutions to correct the system. The wind of change is blowing on the side of PPP and nothing can stop us. We are like a locomotive in motion and we remain committed in providing millions of jobs to the jobless youth in this country and hope and prosperity for every citizen of Ghana.

One thought on “PRESS STATEMENT ISSUED BY THE PROGRESSIVE PEOPLE’S PARTY AT A PRESS CONFERENCE ORGANISED TO ADDRESS MATTERS RELATING TO THE ALLEGED DISQUALIFICATION OF DR. PAPA KWESI NDUOM BY THE ELECTORAL COMMISSION OF GHANA.”