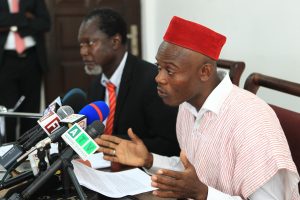 Good morning ladies and gentlemen of the press. We are happy to have you here again in pursuit of our agenda for Competent and Incorruptible leadership by the next administration, to ignite the rapid and sustainable development of our dear nation.
After our press conference on the President’s Ford Gift Saga, we followed with the filing of a petition at the Commission for Human Rights and Administrative Justice for official investigation into the matter. We as a party, deem it necessary to explain to the nation and to the world in its entirety, why we take bribery allegations so seriously.
We will also explain to the nation why we will soon head to the High Court to seek redress over the state’s refusal to implement the compulsory aspect of the Free Compulsory Basic Education policy enshrined in the 1992 Constitution. Once again you are welcome!

THE FORD GIFT MATTER:
The PPP wants to put on record and make it very clear, that we are not pursuing the Ford Gift matter against the President as a person. There is nothing personal here. Rather, it is part of our avowed agenda to inject the principles of incorruptible leadership into our society and, to a large extent, the DNA of our leadership culture that prompts us to pursue the action. It should interest you to note that, few Constitutions in the world provide for corruption, or even talk about it, as the fundamental law of the land. But the framers of Ghana’s 1992 constitution were very clear and laid emphasis on Transparency, Probity and Accountability; values that seem to have spirited away from our governance and leadership culture due to the lack of enforcement of the laws of the land.

We believe the development of the Code of Conduct by the current administration, headed by President John Mahama, for his own Ministers and Public Office holders was for a purpose. And that purpose we strongly believe was not to throw dust into the eyes of the public, but to serve as a guide and limit to which sanctions would be applied when breached by public office holders including the President.
It is with this understanding of the 1992 constitution and the President’s own established code of conduct, coupled with our own crusade against corruption, that we are determined to pursue this matter to its logical conclusion. If we do not do this to restore probity and accountability, we the people of Ghana will suffer individually and collectively the consequences of losing over 3-Billion Dollars per annum to corruption and wastage in our economy.

While we trust in the CHRAJ to investigate the matter in an independent and objective way, we cannot help but use this opportunity to call on parliament, the Legislative arm of government, to invoke its powers of investigation to also look into the matter and show to the people of Ghana and the world at large, that the rule of law is in operation in Ghana, our mother land, and they, the legislative arm of the realm, are up and doing and will stop at nothing to independently and objectively investigate this matter without fear or favour, come hell or high water, to bring the saga to its logical conclusion.
Our problem with the Ford Gift is based on the real likelihood of a conflict of interest, in which case the President, with his excessive powers and being a friend to the donor of the gift, could have easily influenced previous, current, and / or future commercial transactions between the Republic and the donor.

It is to avoid such challenges that our current constitutional arrangement poses to the Executive arm of government, that we insist on the need to clearly separate the executive personnel and their functions from the legislative personnel and their functions, for the principles of separation of powers and checks and balances to operate. A PPP administration will immediately it takes office therefore, present a bill to amend the law to ensure that members of parliament cannot and will not double as ministers of state.
Still on reforms, we believe strongly that, establishment of the office of the Independent Public Prosecutor, who would be ready to go after all public officials who contravene their code of conduct, is an absolute necessity in the fight against corruption, and not someone who is a card bearing member of the party in power doubling up as the chief legal counsel to the Executive. And we are convinced that any Ghanaian leader, present or future, who does not see the need for this reform is only paying lip service to the fight against corruption and does not deserve to be taken seriously.

In The FCUBE Matter:
You will recall that the Supreme Court in May last year declined our application that requested the highest court of the land to compel the government to enforce the Free, Compulsory, Universal, Basic Education {FCUBE} policy. Giving reasons, the seven-member panel of the Supreme Court led by Justice Julius Ansah explained that the matter and the relevant provisions relied upon by the PPP did not occasion any ambiguity to require an interpretation. According to the Supreme Court, the enforcement of the provisions that the PPP referred to, belonged to another court, which is the High Court.
We continue to stand on Article 25(1)(a) of the 1992 constitution which prescribes that: “All persons shall have the right to equal educational opportunities and facilities, and with a view to achieving the full realisation of that right—basic education shall be free, compulsory and available to all.”
As hinted in my opening statement, we will head to the High Court in the coming weeks to seek redress in accordance with the Supreme Court direction that we rather go to the High Court to seek enforcement of the Free, Compulsory, Universal, Basic Education (FCUBE) policy enshrined in the 1992 Constitution.

Successive administrations since Ghana returned to constitutional democracy in 1992, have failed to enforce this important constitutional provision. The failure has resulted in many children roaming the streets instead of being in school. You would agree with me ladies and gentlemen, that education is key to personal and national development.
Where will you be without education? Where will I be without education? The President, Chief Justice, Speaker of Parliament, our professionals etc. Where will they be without education? It is our thorough appreciation of the value of education that motivates us to travel this path. We hope our efforts to bring good to the people of Ghana will not be in vain as we go to the High Court to pursue its implementation.

Abu Ramadan Case: A CASE OF “MUCH ADO ABOUT NOTHING:
The Progressive People’s Party has followed with keen interest the recent court case involving Abu Ramadan and another versus the Electoral Commission and another, and we can best describe the whole incidence as “much ado about nothing”.
Both the plaintiff’s plea and the defendant’s defense arguments will not solve the problems of the voter register, and neither will it safeguard the sanctity of our election come November 7. This court case and the matters arising will rather heighten tension and breed more mistrust in the electoral processes.

We have also observed that, the concentration of both parties is on the National Health Insurance Card (NHIS) registrants rather than on the dead persons, minors, and non-citizens, among others on the voters register which could be far greater than the former in terms of numbers. Sometimes you wonder what the motivations are if what is fought for – using a lot of our resources – will not provide a lasting solution to the people’s woes.
The arguments that a new voters register will solve the problem of a bloated register is preposterous and puerile to say the least.

The Progressive People’s Party believes the panacea to the problem of the Voter Register is to use the National Identification Authority to capture the data of each and every Ghanaian now and subsequently from birth. This will not only solve the problem with the voter register but will also help synchronize all data collected from different organizations such as the SSNIT, DVLA, NHIS and other biometric data in the country.

This will save Ghana a lot of money and will help the country collect taxes from citizens who are engaged in economic activities across the country. It will also help the police and other security urgencies to conduct thorough investigations in order to combat crime in Ghana. The National Identification system, when implemented will change this country from a lawless country to a disciplined and well-structured country.

IMPLEMENTING THE POLITICAL PARTIES LAW:
The Political Parties Law requires political parties, among other things, to be national in character; have offices opened in at least two-thirds of all districts in the country; have officers elected at the constituency, regional and national levels under the supervision of the EC; and provide financial reports to the EC. The Law also required the EC to audit the ability of existing parties to meet these requirements but since 1992 no political party has been disqualified or removed from the register of parties as a result of not meeting these and other requirements. Is there any wonder that there are dead voters on the voter register?
Recently, the Ghana Broadcasting Corporation (GBC), as part of its plan to educate and inform the electorate on the policies of political parties extended an invitation to 24 political parties in the country of which only 17 responded to ballot for free air time on the State’s radio and television.

Arguably, the EC provided GBC with the list, but the question is, are all these legitimate parties and how do we make the rule of law work in our nation? Because if we want the law to work, then we must be interested in enforcing the law. As we speak, the New Patriotic Party has not submitted its financial report to the EC, even when limited to the last 4-years of its 24-years in existence. We wait to see when the EC will, since 1992, exercise its powers to enforce these laws and deregister non-compliant political parties as promised by the Chairperson.

Finally, the Progressive People’s Party will like to bring to the notice of the public. that the half-baked policies implemented by the NPP and NDC over the years are what has left this country impoverished. We call on Ghanaians to be conscious and to “Per Papa Preko” in order to safeguard the future of this country and that of our children.
I thank you for coming. Thank you.