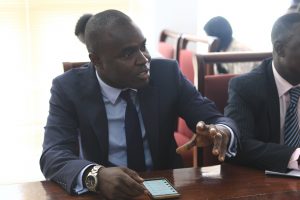 The Progressive People’s Party (PPP) is mounting pressure on the Electoral Commission (EC) to with immediate effect implement the political law. According to the party, by law ”every political party should be national in character; have offices opened in at least two-thirds of all districts in the country; have officers elected at the constituency, regional and national levels under the supervision of the EC; and provide financial reports to the EC.”
The law they argued, required the Commission to audit the ability of existing parties to meet the requirements, ”but sine 1992 no political party has been disqualified or removed from the register of parties as a result of not meeting these and other requirements.”

The General Secretary of the party at a press conference yesterday chided the EC for failing to crack the whip on these ‘dead political parties’ who only suffice in an election year. He also raised concerns over a planned presidential debate to be organised by the Ghana Broadcasting Corporation (GBC) where they believe some dead political parties have been resurrected following a list presented to it by the EC. ”The EC provided GBC with the list, but the question is, are all these legitimate parties and how do we make the rule of law work in the nation? Because if we want the law to work, then we must be interested in enforcing the law.

As we speak, the NPP party has not submitted its financial report to the EC, even when limited to the last 4-years in existence.” He added, the party is waiting on the EC to exercise its powers to enforce these laws and de-register non-complaint political parties as promised by the Chairperson. IPP, GCPP, GFP not qualified: Meanwhile, the Policy Advisor of the party, Kofi Asamoah Siaw says parties like the Ghana Freedom Party (GFP), Great Consolidated Popular Party (GCPP), Independent People’s Party (IPP), are among some of the parties that needs to be de-registered. According to him, it makes no sense for such political parties to continue to operate when in an actual fact they don’t meet the requirements of the political parties law.