Dr Papa Kwesi Nduom is questioning why President John Dramani Mahama will prefer debating Nana Akufo-Addo of the NPP instead of him (Dr Nduom) and wonders whether the NPP flag-bearer comes across as an easier match for the President. Dr Nduom has been calling for a debate with the President over the past year on how to offer alternative solutions to the myriad of problems confronting the Mahama administration and Ghanaians.

Dr Nduom questioned the President’s pick and choose attitude on the issue, wondering whether he dared Akufo Addo because he (Akufo Addo) comes out as an easy match to him (President); and further 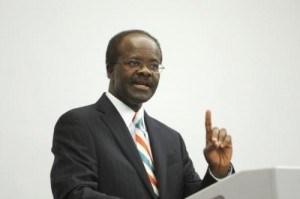 wondered whether by ignoring him (Dr Nduom), the President is aware that he is also ignoring the growing numbers of people that Dr Nduom appeals to.  Particularly, the youth find Dr. Nduom’s attitude to job creation and inclusiveness attractive and worth supporting.

According to Dr Nduom, “does President Mahama think he can ignore people that I appeal to?” Dr Nduom insists that as President of the country, President Mahama should make himself ready to debate him on detailed policies on corruption, job creation and therefore believes he can withstand him in a debate. Dr Nduom has been consistent with his solution-driven alternatives to the Mahama administration where he has been insisting that the country’s energy crisis for instance cannot be fixed within a year or two.

He has since 2008 insisted that the only way to ensure development at the local level is to elect Metropolitan and Municipal District Chief Executives (MMDCEs) to ensure that they are responsible to the people who voted them into power and are therefore are obliged to heed to their wishes or get the sack after four years.

“If Ghanaians are smart enough to elect a President and a Member of Parliament, why can’t they be equally smart to elect their MMDCEs?”, Dr Nduom has been asking for the past eight years. Dr Nduom has also been at the forefront of the corruption crusade where he believes that we can deal decisively with the canker if we separate the Attorney General’s Department from the Ministry of Justice to ensure that the A-Gs Department is replaced by an Independent Prosecutor who shall not cover-up corruption at higher places because of one’s political affiliation.

He has often referred the President to the Chapter 6 of the Country’s Constitution that defines what good governance should be: that is high quality, compulsory and continuous education at the basic level and how there should be no excuses for any president or administration to implement that chapter called Directive Principles of State Policy.