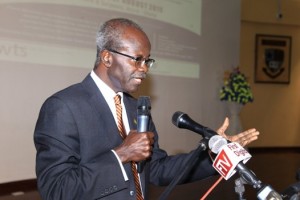 Dr Nduom said a lot of people were dazzled by the presentation but so far the party has registered 10 fresh members who immediately picked up membership forms after the Forum.

At the Forum, the PPP argued the best way to compile a credible voters’ register is to have a National Identification System which will form the foundation for an electoral roll.

Speaking to Starr News, Dr Nduom said: “This small example of Kofi Siaw [PPP General Secretary] standing there and talking about our position won us 10 new members; professional people who also came and paid money to be card bearing members and promised to pay contribution.

“They said where did this man [Siaw] come from, we said he has been there, he has been talking but maybe you didn’t notice.”

Dr. Nduom has therefore appealed to the Ghanaian media to give his party more attention to propagate their plans to the electorate ahead of the 2016 elections.