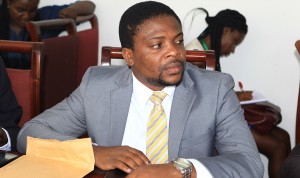 National Youth Leader of the Progressive Peoples Party (PPP), Devine Nkrumah has called on Ghanaians to punish fellow opposition party, the New Patriotic Party (NPP), by voting against it in the upcoming 2016 election due to the party’s arrogance.

He said the NPP has arrogantly deluded itself into thinking that it is the automatic successor to the failed President John Mahama-led governing National Democratic Congress (NDC), when that is far from the fact.

“The NPP sees itself so much as the next government to the NDC, and as a result, party members are fighting each other and want to be in the good books of Nana Akufo-Addo simply because they believe he’ll be the next president to reward them with positions”.

The largest opposition party has been in the news recently for all the wrong reasons, with internal party wrangling being the order of the day.

NPP National Chairman Paul Afoko and General Secretary Kwabena Agyepong have come under intense pressure by sections of party members to quit their positions because they are believed to be working against the victory of Nana Akufo-Addo in the 2016 election.

Contributing to a discussion on Peace FM, Monday, Devine Nkrumah wondered how the NPP will be able to govern the country with such acrimony should it win the 2016 elections which promise to be keenly contested.

“Even Mahama who has relative peace in the NDC is not able to rule this country effectively, how much more the NPP who are always fighting against themselves, there are lots of internal bickering in that party which will make governance difficult for them”.

He added that as opposition parties, posterity will not forgive them if they fail to wrestle power from the clueless NDC government which has gathered so much resources but has woefully failed in administering this county.

“This is one government that has had so much; contracting all the loans, getting all the oil money, so much revenue from tax collected and yet they have still mismanaged the economy, this is unacceptable,” he noted.

Mr Devine Nkrumah urged Ghanaians to choose competence over mediocrity by voting for Dr Papa Kwasi Nduom the Presidential Candidate of the Progressive Peoples Party(PPP), since both the NDC and NPP have woefully failed Ghanaians.