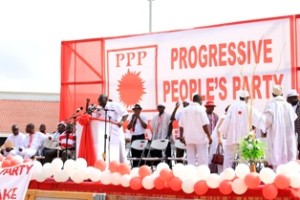 The Theme for the Convention is: Strategize to form Government in 2016

All constituency branches of the party have begun parliamentary primaries to select candidates for the 2016 elections which exercise will end on 30th October, 2015.

The National Convention will announce the modalities for the election of the 2016 presidential candidate of the party which will take place in November, 2015.

The National Committee urges all PPP members and supporters to continue with the polling station organization of recruiting apostles of change to make our objective of forming government in 2016 possible. We are more encouraged than ever before to work hard to rescue Ghana from incompetence, greed, corruption and poverty.