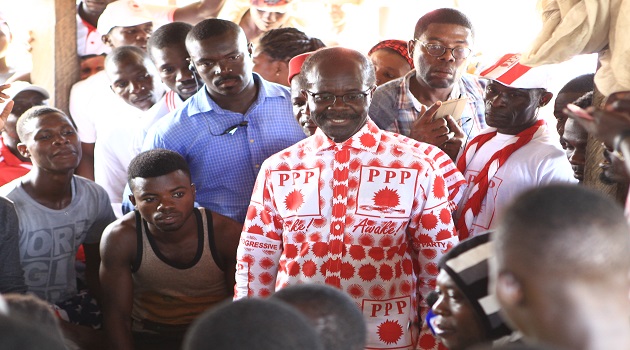 The Presidential Candidate of the Progressive People’s Party (PPP), Dr. Papa Kwesi Nduom, has said his government will tackle what he calls the governing National Democratic Congress’ (NDC) lazy approach to taxation when voted into office.

According to Mr. Nduom, government has resorted to piling up taxes on essential commodities such as electricity and fuel, a situation he believes has largely contributed to the economic challenges Ghanaians are battling with.

“What we are practicing is the lazy man’s approach to taxation. What government does is to pile up taxes on energy, petrol because we cannot live without these…They squeeze us [Ghanaians] some more and we give up.”

Speaking at the Institute of Economic Affairs’ (IEA) debate on Tuesday evening, Mr. Nduom said the PPP, when voted into office, will ensure the implementation of a National identification  system, which comes with the unique numbering system, to fairly tax consumers based on their income levels.

He believes the move will also ensure that tax rates are reduced by at least 50 percent within the next four years.

“I have talked about the implementation of the National Identification system which comes with the unique numbering scheme… If we are able to introduce this system, I believe we can within four years reduce the level of taxation for those who are paying taxes by at least 50 percent, because we would have expanded the numbers of people who are coming in, we would have increased productivity and therefore we will be able to raise more money by applying the funds that come from the people who are producing.”

The PPP is not the only party which has intentions of cutting down taxes when voted into office.

The 2016 Vice Presidential Candidate of the opposition New Patriotic Party (NPP), Dr. Mahamudu Bawumia, has also assured Ghanaians that a future NPP government will  eliminate all taxes levied on private universities, and in some cases reduce other taxes.

According to him, tertiary education has become expensive and inaccessible, due to the current taxes imposed on private universities in the country.