The Presidential Candidate of the Progressive People’s Party (PPP), Dr. Papa Kwesi Nduom, says his party holds the key to unlocking the fortunes of the country in all sectors especially that of Agriculture and Employment.

He said if voted into power, the PPP will roll-out well structured interventions that will strengthen the economic embodiment of the country and make it a more robust one. Dr.  Nduom made this remark at Tuobodom in the Brong-Ahafo when he took his nationwide campaign tour dubbed “Don’t waste your vote on those who have disappointed you” to the region.

At Sampa in the Jaman North Constituency  Dr. Nduom  and his team paid homage to the chiefs and elders of the land and sought permission to begin with his tour in the area. He acknowledged the people for their hard work in cashew and rice production and touched on the need to help the youth with varied intervention so they can become self reliant.

The Adonteng Hene of Sampa Traditional Area , Nana Kwadwo Masa lauded Dr.  Nduom for his immense contribution to youth empowerment through job creation. While wishing him well, the chief appalled to Dr. Nduom to expand his business in the area and roll-out more lucrative ventures in the area to shore up economic activities there.

From the palace, Dr.  Nduom spent some time to address scores of party faithful and sympathizers at a mini rally held in his honor. Addressing the people, Papa Kwesi Nduom touched on the need for change in government. He was of the view that the current government has not been able to perform up to task and for this reason there is no need to keep them in power after the polls. He promised to revamp the Agriculture sector with the requisite know-how so farmers can beef up their yields.

He introduced the Aspiring Parliamentary Candidate for the area Joseph  Nsoah to the gathering and asked for more vote for him to have a one touch victory in the December polls.

At Drobo in the Jamam South constituency Dr. Nduom made a whistle stop at the chief’s palace. He said Ghana needs a change  of government to redeem her image and shine as the black star which signifies the hope Africa. He stressed that the PPP government is the right choice for the country. He called for more support and votes from the people to enable him and his team to steer the affairs of the country to an expected end. Also he pledged to do clean and peaceful campaign devoid of insults. He introduced David Awupori Vuguesh as PPP parliamentary candidate for Jaman South. The paramount chief of Mpuasu-Japekrom traditional area  Okatakyie Amoah Aturu Nkonkonkyia said the beauty of democracy is seen when its people are allowed to change government through free , fair and transparent elections hence the need for Ghanaians to abide by the principles of democracy.  He called for more assistance in many ways especially Agriculture development and infrastructure and this he says will help the people to get on with life and  make them feel a sense of belonging. The area is noted for cultivation of timber, cashew and cocoa. 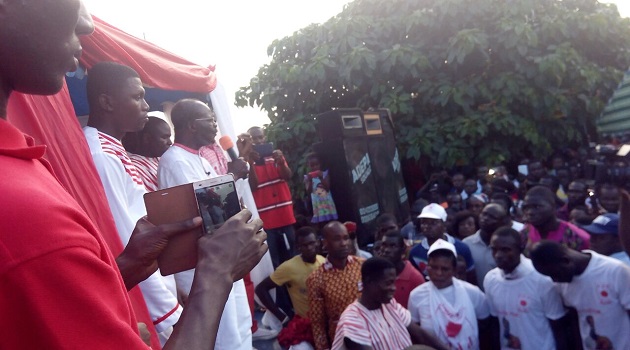 At Jinijini in the Berekum West constituency, party supporters greeted the entourage with brass band music and chanting of party songs. The team met with the chiefs and elders of Jinijini where he was lauded for his entrepreneurship and peaceful nature by the chief of Jinijini, Nana Tutu Barfuor Asare.

Dr.  Nduom advised his supporters to conduct themselves well before,  during  and after this political season.

When he got to Berekum all activities came to a halt and many of the crowed took to their heels to catch glimpses at him. At the Berekum  Hene’s palace, a durbar was held in his honor. Dr.  Nduom and his entourage were received by the paramount chief of Berekum Dasebre Dr. Amankona Diewuo.

Dr.  Nduom addressed the gathering on issues bothering on peaceful elections and wealth creation. He introduced the parliamentary candidate of Berekum West, Eric Nana Amposah for endorsement. He solicited for more votes for him to get the opportunity to represent them in parliament and bring progressive development to them. He promised to expand his businesses in the area and help in building the economy as well as assisting with interventions like manufacturing of raw materials so the people will have better livelihoods. Also Dr, Nduom, promised to pay equal attention to the needs of the citizenry accordingly. The Paramount chief of Berekum said it is God who installs a leader and that his prayer is that Ghanaians will be guided by the spirit of patriotism so they will exercise their franchise peacefully. He urged them to vote wisely bearing in mind their current living conditions. Wrapping up the first phase of his tour Dr. Nduom flunked by his party faithful canvassed through the main streets of Sunyani and later addressed a rally at the central business square. He delved deeper into state of the country’s affairs in terms of Health, Education, Industries, and youth empowerment.

He asked the people to avoid wasting their votes on parties that have nothing good to offer the country and  vote wisely re-echoing the idea that Job creation and wealth making are key to making the country’s economy more vibrant. The parliamentary candidate for Sunyani East Vivian Kaikie Tetteh promised to ensure that her constituency will have its fair share of development when elect.