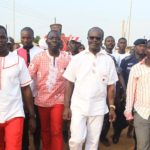 Presidential Candidate of the Progressive People’s Party for the 2016 election Dr Papa Kwesi Nduom has asked Ghanaians to vote for him in the upcoming elections if what they seek most in the country is employment.

Dr Nduom widely celebrated as Edwumawura for his ability to create jobs for Ghanaians was in the Gomoa West constituency to launch the parliamentary campaign of Charles Kofi Yawson, the PPP parliamentary candidate for the area.

Addressing a mammoth gathering at the community park Dr Nduom asked Ghanaians to vote for him if only what they want are jobs noting that each of the presidential candidates standing for election this year have their unique talents, but his talent of job creation is what the country need now.

According to Dr Nduom every human has his unique talent and he Dr Nduom was blessed with the talent of finding jobs for people, so he remains the obvious choice to solve the nation’s unemployment hang over.

‘’I am not going to stand here to promise factory in every district because I have businesses already in each district throughout Ghana. I am also not going to promise one million jobs, but you standing here know I am already employing Ghanaians with my own money, imagine what I can do with the state’s finances, when I have all of the states resources backing me?

Welcoming Dr Nduom to the constituency the Tufuhene of Gomoa Eshiem, Nana Asam asked the people to support Dr. Nduom and Charles Kofi Yawson to bring development to the people of Ghana since they have demonstrated proven capability to perform.

‘If you look at the PPP they are an orderly and well planned party. I have every believe that when the PPP is voted into power they will transform the country, seeing with what he has been able to do with his bank {GN Bank} is ample evidence of his abilities’’.