The 2012 flag-bearer of the Progressive People’s Party, (PPP) Dr. Papa Kwesi Nduom, has sent congratulatory message to the Convention People’s Party (CPP) for holding a successful delegates’ conference which elected a flag-bearer for the 2016 elections. 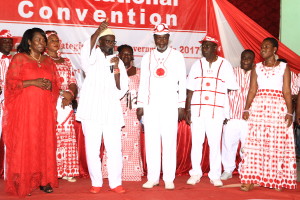 In a terse statement released barely 24 hours after the congress, Dr. Nduom acknowledged the “determined and positive purposeful role” the Chairman and leader of the party, Prof. Edmund Delle, played in “bringing the conference to a peaceful conclusion.”

Dr. Nduom also extended a hand to say: “Well Done” to Mr. Ivor Kobina Greenstreet for executing a campaign to bring hope to the CPP and winning the flag-bearer contest. He said “now, it is up to the executives at the national, regional and constituency levels, the flag-bearer contestants and leading members of the party to unite behind Mr. Greenstreet,” saying “An important river has been crossed.”
Meanwhile Mr. Greenstreet polled a shocker when he secured majority votes to beat off competition from three others namely Samia Yaba Nkrumah, Joseph Agyapong and Bright Akwetey. All along many had thought Madam Samia Nkrumah was going to cruise to a sweet victory.

However, journalists and some leadership members of the CPP had a foretaste of what was to come when deafening cheers greeted Mr. Greenstreet when he took his turn to address the 2,500 delegates who had gathered at the Ghana International Trade Fair Centre in Accra on Saturday.

That clearly sent signals of a possible strong performance by Greenstreet.
However, after six hours of voting in a partially dark auditorium, former General Secretary of the party, Mr. Greentstreet, was declared winner by the Electoral Commission (EC).

He pulled 1,288 votes representing 64.21% of the valid votes cast. The dreams of Ms. Nkrumah who is also the daughter of the party’s founder, Dr. Kwame Nkrumah, to lead the CPP in the November polls, were shuttered as her sympathisers murmured that the party had been sold. Legal practitioner

, Bright Akwetey, managed to secure only 42 votes while Canada-based businessman, Joseph Agyepong, secured 83 votes. The total votes cast were 2006 and 14 ballots were rejected. Clearly Ms. Samia who was not happy with the results alleged that the winner (Mr. Greenstreet) paid bribes to delegates to secure the victory.
“I’m obviously not happy with the results but I accept them. The fact of the matter is that every delegate was paid between Gh¢200 and Gh¢500, so it goes down to money and we can’t be happy about that,” Ms. Nkrumah told the media after the declaration of the results. She, however, admitted she did not have physical evidence of the act rather she heard delegates talk about it. Ms. Nkrumah hinted that she might contest a parliamentary seat moving forward.

Earlier, some delegates whose conversations this reporter captured on phone, alleged that while others were giving them [delegates] higher amounts of monies, Ms. Samia was paying only GHC10 and that they will not vote for her. Others also alleged that they received GHC100 from Ms. Samia’s camp. Some of the delegates indeed confirmed to this reporter that they received monies from some candidates. However, those monies, according them, were classified as ‘lunch moneys and TNTs [money for transportation] by the givers.

In his opening remarks, Chairman and Leader of the party, Prof. Edmund Delle, disclosed that it was agreed at a National Executive Committee (NEC) meeting that the party continues talks with the People’s National Convention (PNC) on a possible merger.

He stated categorically that the party will never join any political party and/or sell its sovereignty to any of the ‘so-called bigger parties’ and called on members of the party to take the affairs of the party into their hands and that only they [CPP members] can destroy the party. He also rejected calls from the New Patriotic Party (NPP) for an alliance.

In his victory speech, Mr. Greenstreet thanked the leadership of the party and pledged his resolve to work with Messrs Akwetey and Agyapong and Ms. Samia to secure victory for the party.
“I will lead party with integrity because we are here not to serve ourselves but Ghanaians,” he said.