The electorate in Obuasi East and Ahafo Ano North Constituencies in the Ashanti Region would produce two Members of Parliament for the Progressive People’s Party (PPP) when the 2016 general elections are held.

Residents in the two constituencies made their intentions known, when the PPP took its national tour to the Ashanti Region on Saturday. They cited disappointments they have suffered at the hands of the National Democratic Congress (NDC) and the New Patriotic Party (NPP) as the main reason for switching their votes in favour of the PPP.

The party embarked on the nationwide tour themed; “Awake and Vote for Change” last week from the Central Region, to energise their grass root supporters as well as re-engage the electorate in winnable constituencies on the essentials of its ten point agenda for the nation’s transformational development, ahead of the 2016 campaigns. 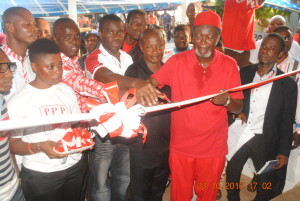 At Obuasi, the party’s Parliamentary Candidate Mr. Frank Aboagye Danyansah, who is also Chief Executive Officer of Danywise Estate and Construction, was introduced to the Chiefs and People, and endorsed by National Chairman Nii Allotey Brew-Hammond.

In his address to the electorate, Mr. Danyansah said PPP would bring on board a new set of progressive leadership mindset with completely fresh ideas to reverse the dwindling fortunes of the local and national economy.

“The high prices of building materials, the high cost of living compounded by the unbridled corruption in all spheres of life, are frustrating innocent citizens. Here in Obuasi, there is too much human and vehicular congestion, productivity is lost, while AngloGold has laid-off a lot of workers, so the unemployment figures here are very high and there appears to be no leader in charge… I am here to fix the problem” he said.

Later in the day, at Tepa, in the Ahafo Ano North constituency, people in the town and surrounding communities came together to welcome members of the PPP National Committee led by National Chairman, Nii Allotey Brew-Hammond, to a durbar at the forecourts of the party’s new constituency office.

Mr. Daniel Kyei, an Educationist and former Assembly Member was introduced to the constituents as the party’s Parliamentary Candidate for the 2016 elections. Mr. Kyei expressed his gratitude to the constituents and delegates for endorsing his candidature and promised to use his resources and vast networks in the communities to secure the constituency for the PPP.

The National Chairman explained the party’s ten point agenda with emphasis on changing aspects of the 1992 constitution that have turned out to be detrimental to the nation’s development efforts.

“We cannot stop corruption in Ghana if the Attorney General remains the Chief Legal Advisor to the President and at the same time the Chief Public Prosecutor who determines who must be prosecuted for corruption or not. There is heavy conflict of interest there which militates against the Government’s so called fight against corruption. We will change that with the introduction of an Independent Public Prosecutor who would go after all corrupt persons without fear or favour” he assured the cheering crowd.

The National Secretary, Mr. Kofi Asamoa-Siaw cautioned the electorate against buying into the NDC and NPP propaganda of “wasted votes”. “Our votes are only wasted when we vote to get people to parliament and they fail to deliver as they are expected. To that end, if you voted to send someone to parliament in the 2012 general elections and the person has failed to deliver, then that is a clear evidence of a wasted vote and the same applies to the presidency” – he stated