The Progressive People’s Party (PPP) has underscored the need for a complete overhaul of the country’s electoral system.

This comes in the wake of heightened debate for a credible voters register ahead of the 2016 General Elections.

The PPP made the call in statement signed by its National Secretary, Kofi Asamoah-Siaw, and issued in Accra yesterday. 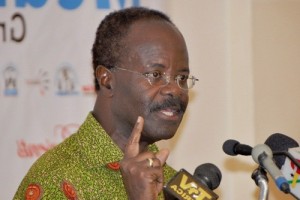 According to the statement, the compilation of new register almost every four years was not the solution to the country’s electoral problems.

Instead, the PPP stressed what Ghana needs is a continuous registration process where citizens who turn eighteen every year and wish to vote will visit the district offices of the Electoral Commission (EC) to register at their own convenience throughout the year.

“We will not support the compilation of a new register if we are going to employ the same method of registration as we had in 2012.

That will not solve the problems of minors on the register, foreigners on the register and the statistical inaccuracies associated with the register. We believe in continuous registration where citizens who turn eighteen years and wish to vote will visit the district offices of the electoral commission to register at their own convenience throughout the year,” the statement stated.

The statement admitted that there were serious lapses in the election processes of the country, claiming that those lapses if not checked had the potential of compromising the integrity of the next presidential and parliamentary elections.

The PPP recounted how it identified these lapses and brought them to the attention of the EC as early as 11th December, 2012.

According to the statement, the PPP re-submitted its proposals for electoral reforms on 2nd September, 2014 in a response to a letter from the EC on the Electoral Reform Committee.

But regrettably, it said, the EC did not acknowledge receipt of the PPP’s letters including its proposals for electoral reforms which were “mysteriously” excluded from the EC’s compiled document titled, “Proposals for Electoral Reforms.”

What is worrying to the PPP, the statement said, was the party’s subsequent exclusion from the formation of the Electoral Reform Committee despite their persistent protests to the EC in a number of letters written in September, 2014.

However, the statement claimed that the PPP has been at the forefront of the campaign for immediate electoral reforms to address all the perennial challenges with the country’s electoral processes.

It noted that the lack of a credible voters’ register was one of many problems with the electoral processes.

“…and we [PPP] wish to indicate that we need to identify a permanent solution to this cycle of complaints and counter-claims about the need to compile a new register almost every four years. We should be tired of wasting our scarce national resources in this manner,” it indicated.

It added: “Our proposed solution to this problem is for the EC to save time, money, logistical deployment and management time by employing the National Identification System database for the compilation of the next voters register.”

Meanwhile the PPP has reproduced its proposals for addressing other challenges with the electoral processes.

These the statement said, must include the enforcement of the Political Parties Act and disqualification of parties that do not meet the minimum criteria within the next three (3) months; and putting in place steps for the verification, documentation and auditing of campaign funding.

On the matter of voting, the statement asked the EC to ensure a fully-electronic voting system similar to those found in Brazil and Mexico with some minimum conditions

Other suggestions, the PPP made, were electronic transmitting of votes to two separate locations, allowing international observers to have full access to the entire electoral process, and hiring the services of two internationally recognised audit firms under 50% /50% contracts with local audit firms to audit the results independently and cross-check each other’s work.

The rest, the statement said, should involve the designing of the electronic voting machine by a Ghanaian technology firm in partnership with international major in technology and the voting machine should be designed such that “rejected ballots” shall be zero where a political party that would meet the Political Parties’ Law criteria would be granted a seat on the board of the voting machine company.